In the late 80's and early 90's of our century in the history of sports entered a new trend called "extreme sports". They combine high-risk sports, non-standard thinking and behavior. Many of this group of sports existed in ancient times, in the form of an ancient ritual or local custom, which showed courage and fearlessness. The founder of most of the outdoor sports practiced in the air in our country is the Varna Extreme Sports Club Adrenaline.

Founded in the mid 80s, the club combines activities such as: parachuting, hang gliding, paragliding, bungee jumping, baseball, rocket bungee, hot air balloon flying and more. The Adrenalin Club very soon managed to introduce modern extreme sports for the local fans. The club spreads the sport to the general public through his own performance and organization. The reduced activity and the closure of many airports in the country led to the idea of ​​creating a club in which athletes could continue the activities of their sports, with their own efforts to improve and promote them.

In 1985 a group of young people set up Club Adrenalin in Varna. From its creation until 1989. the club's activity is mainly expressed by parachute jumping from an airplane or trike. Participations of the club in front of the general public were manifested mainly in demonstration flights with hang gliders and parachute jumps, on some holidays in Varna. During this first period, the Adrenalin Club exists only as an idea in which the direction in which the club is developing and attracting its supporters has not yet been determined. On September 27, 1989. Rosen and Stamen Kasabovi together with Veselin D. Radev perform the first bungee-like jump in Bulgaria. For this purpose, they used the dynamic rope used in the Alpine technique. This famous event in the history of the bungee jumping in Bulgaria they fulfilled, with one end of the rope secured to one side of the bridge and the jump itself is done from the other side. The purpose of this complex, system organization is through sweeping motion, which will describe the jumping under the bridge to reduce the dynamic impact resulting from the jump.

Three years pass until Rosen Kasabov created the first elastic rope in Bulgaria. A series of tests were conducted until the exact jump parameters are determined. Particular attention is paid to the security of the elastic element, the way to equip a person and the jump itself. The rope was made in the western pattern of multifilament bundles of elastic, combined in armor with the necessary dynamic capabilities, protecting the elastic bands from external factors of influence and mainly from their full stretching ability. The date of these first jumps is April 10, 1992, when Rosen Kasabov conducts two test jumps from Asparuhov Bridge in Varna.

These first jumps are the basis of the unprecedented interest in this experience shown by the general public, who set the task for the members of the Adrenalin Club for a safe and accessible for all those wishing to try. After these first bungee events the club conducts jumps all over the country, such as: Asparuhov Bridge - Varna, Bebresh Viaduct - Vitinya, Viaducts to Klisura, Prohodna Cave - Karlukovo Village, Pisanets Bridge - between Ruse and Razgrad, the bridge after the village of Zvezdets over the Veleka River, jumps from the crane - South Park - Sofia and Varna, balloon jumps in Sofia and Plovdiv. The youngest ones also take part in the South Park, such as in 1995. seven-year-old Danny from Sofia made his first solo jump, and several years later repeated his experience in tandem jump with R. Kasabov's son - Jasen R. Kasabov at eight years.

Until 1996, the Club Adrenalin established teams to improve and further promote bungee jumping in Bulgaria. Teams are set up in the cities of Varna, Sofia, Pleven, Burgas, Stara Zagora and Plovdiv. Club members are growing to 700 in number. The period outlining the development of the club until 1996 we also can connect with the first BASE jumps. They are terrestrial parachute jumps, and from there the name "BASE" bears the English capital letters of the words defining the jump locations, such as: buildings, antennas, bridges and rocks. Base jumping is defined as one of the most extreme and dangerous to practice sports. The first base-dumping in Bulgaria is conducted again by Rosen Kasabov, who in 1992 perfomed it from the  Asparuhov Bridge in Varna. Two years later, Veselin D. Radev performed his first base jump. Jumping in the city of Varna from Asparuhov Bridge is done with watering and this greatly reduces the risk of a possible accident.

In 1992 paragliding courses begin at the Club Adrenalin. The places for flights and training were most often Rogachevo near Varna and the hills above the town of Sopot. In 1996 paragliding courses are terminated due to the unprecedented interest in bungee jumping by most club members. From this period the bungee began to develop as a major activity at Club Adrenalin. The increasing interest in bungee jumping, above all, has led to the mandatory signing of a pre-jump statement stating a person's personal desire and physical condition.

Until 2000. more than 5,000 people take part in the club with bungee jumping, with Bulgarians also jumping from Turks, Romanians, Russians, Germans, French, Swiss, Norwegians, Greeks and English. The fact that over 7,000 jumps are done so far, with no serious incidents, speaks of professionalism.

Here, in my opinion, it is important how members of the club manage to develop their ideas and make them accessible to all who wish to immerse themselves in the world of the extremes. The methods used by the club's founders are intended solely to attract members of the club and to promote the sports they practice. During the first period of the club's history from 1985 to 1989 extreme sports in Bulgaria are still not so well known and acceptable as an idea. They are seen as something crazy, not worth the risk. It is these manifestations that direct the attention of the outside world to the great pleasure, to the courage shown and the necessary concentration for a certain expression. In the city of Varna, the day of the challenge would not be the same without the participation of Club Adrenalin. Newspapers, television and radio make a live comment on their every appearance. Those wishing to try some of the extreme sports practiced at the club are now more trusted.

Several paragliding courses have been conducted, the unique BASE jumps are already enjoyed by the local audience, but bungee jumps remain the main attraction. I had the opportunity to talk to many people who tried bungee jumping with and was amazed at how many different things make people jump, repeat their first jump, and how many different impressions each one left. In fact, extreme experience is a stress that seems to unload a person from all the negative energy accumulated in him and enables him to look at the outside world from a point unknown to him in pure consciousness, with the presence of spirit and indescribable energy. Here in Bulgaria the Club Adrenalin not only introduces and organizes extreme events, but also gives a more serious direction for the work and improvement of its graduates. Most notably, this is evident in the Bungee Club competitions in which you not only need to overcome the self-preservation instinct, but also to complete acrobatic numbers that require serious preparation and concentration. Most impressive in these championships is the evaluation given by a jury in a special discipline, which, among other things, needs to be demonstrated with artistry. It is this special discipline of artistry that distinguishes competitions held in Bulgaria from those abroad, gives a much more serious kind of competition and sets higher goals for practitioners.

Until 1998 Club Adrenalin is the only club that has done bungee jumping in Bulgaria. In 1998 a lot of attention is paid to a new attraction - rocket bungee or catapulting. The event itself is a shoot-up with an elastic band and requires a rather large and difficultly movable material base. The device consists of two towers with rope rollers at its upper end, where by pulling it with electric motors it stretches the elastic bands to the upper position and follows the launching of the "catapulting chair", which is fixed to the ground in advance.

In May 1999 members of the Club Adenalin participated in the Second World Bungee Championships, held in the Val d'Anivier Valley near Sierra, Switzerland. There, for the first time, adrenalinians had the opportunity to compete with the world elite in this new sport. 25 people from 10 countries participated in the competition - Switzerland, Germany, France, Italy, Belgium, Costa Rica, New Zealand, Canada, Bulgaria and Austria. The place from which the riders jumped is in itself a unique- Steel Suspension Bridge (referred to by the locals as Spider bridge), only 0.5m wide, 200m long. and is located 190m in height above the stony canyon. Despite the new jump system for the Bulgarians (there they were jumping tied on the cross with an alpine seat, while until then they were jumping tied only on the ankles), they performed more than well: Vasil Vassilev finished 4th and Kalin Petrov was 9th. This was a serious challenge for the rest of the jumpers, who even coined the name of Vassil as a future champion. 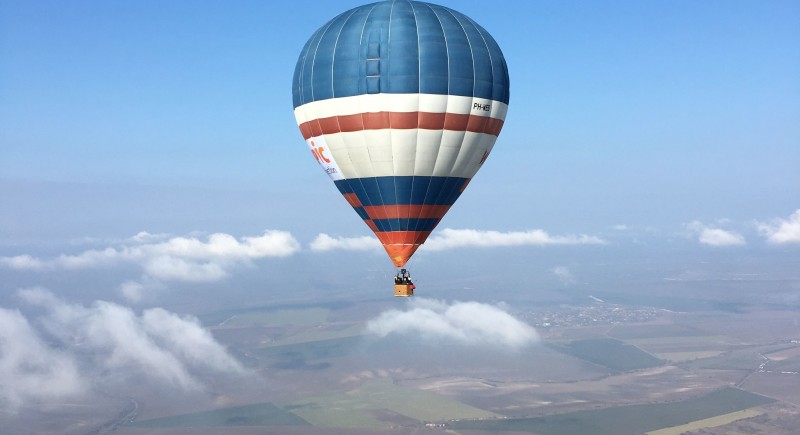 Hello,  On the 16th of February an event with hot air balloon flights was held near the town of Pliska. All participants shared the emotion of flying in the sky like ... 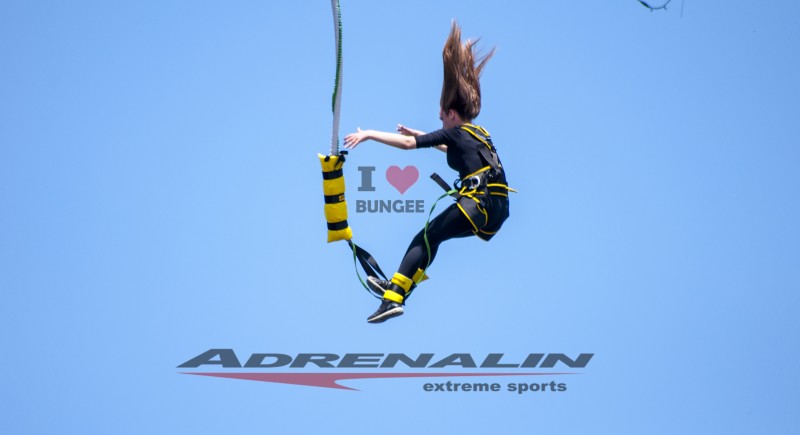 Celebrate the holiday of love with extreme emotion. Surprise your other half with a breathtaking experience. We expect you on Asparuhov Bridge on 14.02 Friday between 12.00 and... 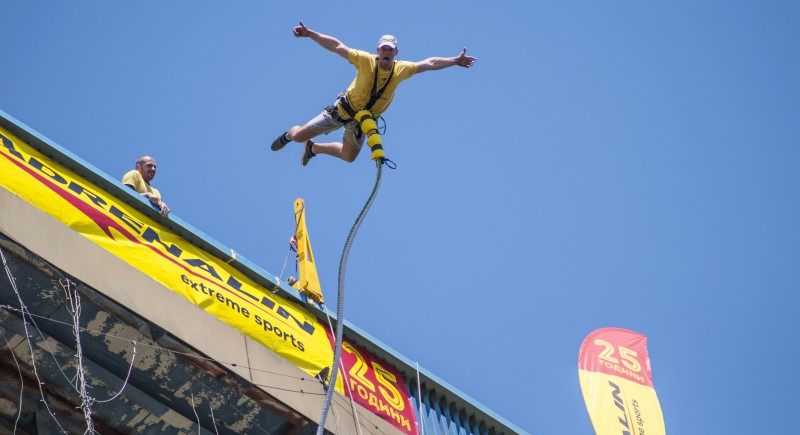 On the first Sunday of February we organize bungee jumps from Asparuhov Bridge, Varna. The hours you can take part in the event are between 12 and 14h. And in tune with th...